Several Christian leaders recently released a statement which was designed to clarify the Biblical position on human sexuality. The statement said nothing new about these issues. Christians have held every proposition in this document for thousands of years. What is new over the past years, is the outrage that comes from those who disagree with statements like this. It is not merely disagreement but venom. 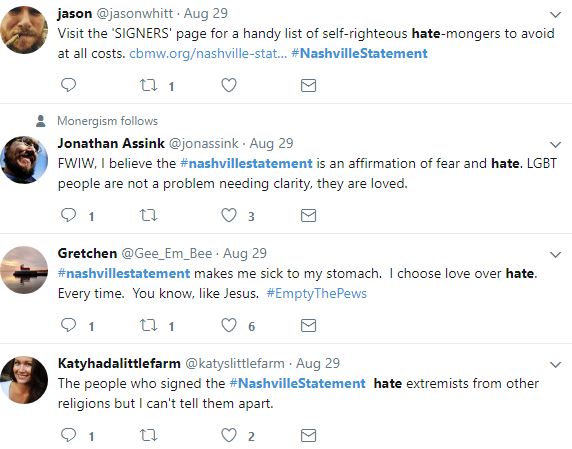 What is pictured above are some of the tame responses; the ones that left out the profanity-laced threats. We live in a time where if a group of people holds to a view of marriage that agrees with almost all of human history, 50% of today’s population will consider them bigots. Some will even call them Nazis and fascists. In condemning them, however, these new moral revolutionaries condemn most people who have ever lived.

The tide is indeed turning against those who hold to the biblical teaching on sexuality. So much so that the warning of being “on the wrong side of history” comes with some empirical force. This, however, should not surprise believers.

In history, when the authorities came for Christians, it was rarely ever because they were “Christians,” it was usually because of some other trumped-up charge. They often said that believers lacked patriotism, or indicted them with some other anti-social behavior. The same will happen in America if these trends continue. They will not say, it is because we are Christian that we need to be punished, but because we are hate-filled bigots abusing those around us through discrimination.

The important thing to remember is that the “wrong side of history” will not ultimately be determined by consensus, but by the only true God who revealed Himself in scripture. The Christian must remain faithful to God. To do this, we must never waver from His word, and we must continue to love those who hate us for it.

If we can only respond to this outrage with belligerence, maybe we should not respond at all. Not being belligerent does not mean that our logic cannot be sharp or our arguments strong. Nor must we water down the wrath to come for those who will not repent, but to quote Francis Schaeffer, “There is only one kind of person who can fight the Lord’s battles in anywhere near a proper way, and that is the person who is by nature unbelligerent. A belligerent man tends to do it because he is belligerent; at least it looks that way.. . .. We do it not because we love the smell of blood, the smell of the arena, the smell of the bullfight, but because we must for God’s sake. If there are tears when we must speak, then something beautiful can be observed.”

May God be your strength, truth your anchor, and love your battle cry.

2 thoughts on “On the Outrage Over the Nashville Statement”