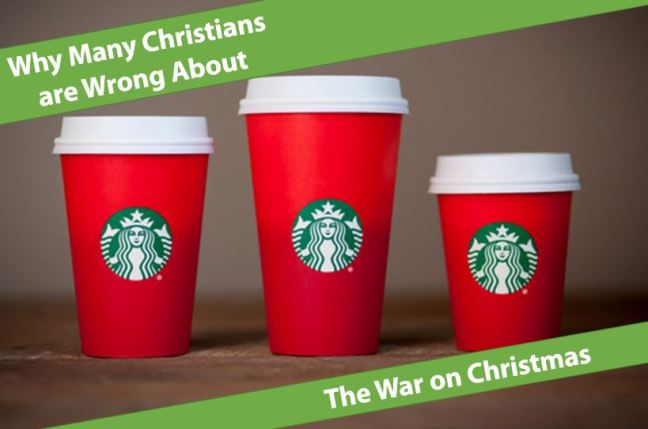 I am of the opinion that the way many Christians are responding to the so-called war on Christmas is wrong. We live in a time when many people, organizations, and business will not publicly say “Merry Christmas” because it might offend someone. Likewise, many of the traditional decorations and songs will no longer see the light of day. Starbucks even has the audacity to fail to decorate their coffee cups to our liking. This has prompted many people to say that there is a war on Christmas.

What many Christians don’t realize is that the Prince of Preachers himself, Charles Spurgeon, also had a war on Christmas.

“We have no superstitious regard for times and seasons. Certainly we do not believe in the present ecclesiastical arrangement called Christmas: first, because we do not believe in the mass at all, but abhor it, whether it be said or sung in Latin or in English; and, secondly, because we find no Scriptural warrant whatever for observing any day as the birthday of the Savior; and, consequently, its observance is a superstition, because not of divine authority. (Charles Spurgeon, Sermon on Dec. 24, 1871).”

Since I refuse to be taken in by the in the genetic fallacy, I would strongly disagree with the conclusion some might derive from this that it is sinful to celebrate Christmas because of its origins, but we must agree that it is not a holiday mandated by Scripture. So my questions for those who believe that there is a war on Christmas would be, “Would you consider Spurgeon part of the war on Christmas if he were alive today because he certainly would not say, Merry Christmas?” Or is he a man with Christian liberty exercising his conscience?

The point of those questions is this, just because some people will not say Merry Christmas, or decorate their businesses the way we want, does not mean there is a war on Christmas that we must hold at bay.

I bring up the Spurgeon quote only to prime the pump and get us thinking. I believe there is a more direct problem with the way many Christians respond to the “war on Christmas.”

Building on the premise laid out by Spurgeon that there is no biblical mandate that we celebrate a holiday called Christmas in December, we, therefore, have no biblical foundation to require anyone to celebrate Christmas, not even other Christians. If it has no biblical basis, then it is a tradition of men. Some non-biblical traditions of men are good, and some are bad, but they all become evil if we make them a requirement to be a Christian in good standing.

“See to it that no one takes you captive by philosophy and empty deceit, according to human tradition, according to the elemental spirits of the world, and not according to Christ.” – Colossians 2:8

Now some may protest and say, but we are not saying they need to celebrate it to be good Christians, and you said some traditions are good. All we are saying is that it is a good tradition that should not be under attack, and stores should not be so worried about offending people. They should say “Merry Christmas” because that is what holiday it is. To that, I would say, I understand the sentiment. Political correctness has run amuck, but is the Christmas holiday the hill upon which we really want to take a stand?

The foundational problem with political correctness is that it trades truth for falsehood to avoid offense, but what exactly is the reality of the Christmas holiday that they are violating. What holiday truths need to be pressed upon those who refuse to celebrate it or are trying to avoid offense? Santa, elves, reindeer, decorated trees, the Christmas spirit?

There are wonderful truths of the birth of Christ that every Christian should broadcast to the world, even if it is illegal to do so and lands us in jail, but we do not need to convolute those truths with the traditions of the holiday. Doing so does more damage than good.

Until I hear better reasons why we should fight the “war on Christmas,” my conclusion is this, as much as I love and celebrate Christmas every year, it is not a holiday required by the word of God. Christians should not require other Christians, and certainly not non-Christians, to celebrate it.